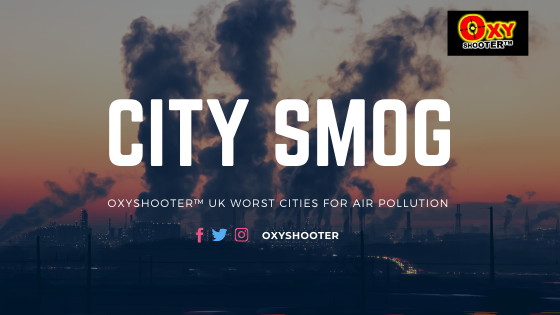 That exceeded the limit of 10 micrograms per cubic metre:

Areas that exceeded the level included London, Manchester and Swansea.

Dirty air can cause debilitating diseases and hasten death.

The figures on air pollution are contained in the WHO’s report, which estimates that globally nine out of 10 people breathe air containing high levels of pollutants

​(free shipping for all UK Based Customers Only).

BREATHING OZONE POLLUTION IS LIKE SUNBURN OF THE LUNGS. IT MAY CAUSE MAJOR PROBLEMS FOR HEALTHY ADULTS
Ozone and Particle Pollution is Causing Major Health Problems in Children and the Elderly according to the Environmental Protection Agency ​
(reference CNN by Jareen Imam) ​

IS SMOG IN YOUR CITY A PROBLEM?

The primary component of smog, is created by a chemical reaction that occurs when sunlight interacts with particulates (soot) from motor vehicle exhaust, gasoline vapors, and dust from power plants.

Nitrogen dioxide, or NO2:

Is one of a group of highly reactive gasses. NO2 forms quickly from emissions from cars, trucks, buses, power plants, and off-road equipment.

According to the Environmental Protection Agency (EPA), this compound reacts with ammonia, moisture, and other compounds to form small particles.

These small particles penetrate deeply into sensitive parts of the lungs and can cause or worsen respiratory disease, such as emphysema and bronchitis, and can aggravate existing heart disease, leading to increased hospital admissions and premature death.

Is an odorless, colorless gas formed when carbon in fuel isn’t completely burned. Higher levels of CO occur in areas with heavy traffic congestion. It is a component of motor vehicle exhaust, which contributes about 56% of all CO emissions nationwide. Other sources are cigarette smoke, wood and gas stoves, and industrial emissions.

Gases are formed when fuels containing sulfur, like oil and coal, are burned, or when metals are extracted from ore. It interacts with other pollutants and can be harmful.

Is now mostly found near waste incinerators, utilities, and battery manufacturers. Lead emissions from gasoline have declined by 95% since the EPA in the USA began regulating clean air standards more than three decades ago. Some major cities across the world have gotten worse.

Oxygen is essential for healthy cell maintenance, cellular healing, repair and cellular reproduction. It also plays a vital role in proper metabolic functions, blood circulation and the assimilation of nutrients, digestion, and the elimination of cellular and metabolic wastes.

Oxygen allows the body to cleanse, detoxify, energize, revitalize, regenerate, metabolize, and boost the immune system without side effects. Contained in the nutritional product formulas are “Aerobic” proteins, major and trace mineral elements, electrolytes, and dissolved oxygen. The formulas are unique among oxygen therapies in their delivery method using ionic trace minerals in an acidic solution, enabling oxygen to be taken “into” the cells”.